So we got Awoxed.
You might've heard about it, if not here is the story that got broke on themittani.com
http://themittani.com/news/dust-514’s-first-recorded-awoxing-incident
I'd just returned from work and due to a timing miscalculation on my part, I missed getting into the battle myself. This is now a personal regret of mine but not for the reasons you might think.
I wasn't upset because I thought I might be able to stop it. It wasn't because I'm the only one with the access to pay such a ransom should we wish to be stupid enough to do so. And it wasn't because I was denied the chance to rage at Model No 0001 verbally.
It was because it was freaking hilarious!!!!
As the photo grabbed at the time by a D-UNI Merc shows, we were loving it. 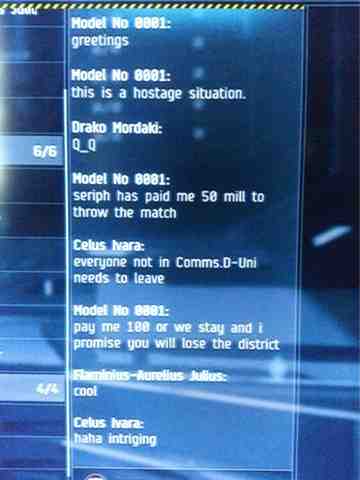 I'm so proud of Flaminlus saying cool when he did. And Celus laughing.
Now obviously, this was all happening just as I was logging on and firing up my venerable iMac, launching Skype as it did so and logging me into @GimbleB's BOTG chatroom. I told the amassed Mercs present, the situation in real time as it unfolded. Lioso was there at the time, leading to the above piece.
Now, it would seem that this was indeed the first case of Awoxing in Dust's PC game. Some CEO's may consider this to be a humiliation, a public flogging from which there is no recovery.
But I'm not wired that way.
What this does is cement DUST University into the history of Dust 514. It also alerts the other corps of a game mechanic exploit that some may not have been aware of. A service we are happy to provide.
The silly thing is that I said this was going to happen at Fanfest only a few weeks ago. I spoke to the Dev's and members of the CPM about it. We discussed ways to counter it or at the very least make it harder to pull off. I think I even said that I bet that we'd be the first to fall victim to it because of our open door policy on recruitment.
I'm a bookie in real life. I should've made a book on it right then. I'd have made much more than the 100m that they wanted.
The game should give Corporations the chance to infiltrate a a rival and do this sort of meta-game. But it should be hard to do. It should be because a spy has carefully worked their way up the corporate ladder, gaining the level of trust and access they need so that when they flow, the tears taste sweeter.
Using a currently broken mechanic to do it, kinda diminishes its impact and all it did was produce tears of mirth.
Posted by Dennie Fleetfoot at 04:03